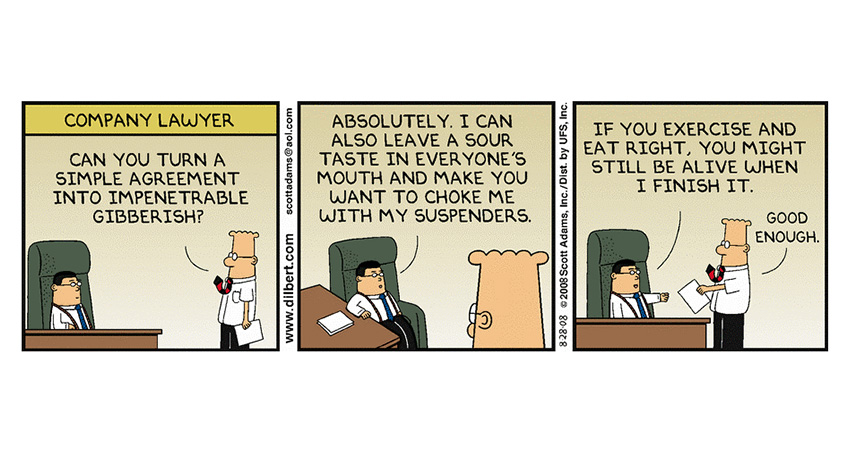 The LegalTech Marketplace in 2019 and Beyond

In a test conducted by Vice news for their special report on the “future of work”, a lawyer from a top law school faced off against the LegalTech software company LawGeex’s AI in a quasi-homage to Watson appearing on Jeopardy!

Both contestants were tasked with finding where two NDAs violated a company’s standard practices, or preferred policies. For example, a company may only want to sign two (2) year NDAs, and if the NDA being analyzed had a three (3) year term, it was the lawyer and the AI’s job to modify that clause.

Getting to the good part now…the results? Not only did the AI beat the lawyer’s analysis, but also it did the analysis in half the time it took a human. What a blow for lawyers everywhere, right? Well, not quite. After the fact, the lawyer was asked quizzically, “you don’t seem disappointed?”

What he said in response is quite profound: “I wasn’t disappointed when the iPhone came out.”

What he meant by that response is that technology is something we should look to embrace as an enabler of people to be more efficient. Yes, there are definitely cases (e.g. driverless trucks), where the human is less of a clear fit in the picture, but not so much with LegalTech, we have a win-win…in theory.

Software should enable the same amount of lawyers to do far more work, and be far more efficient with their time. Software doesn’t get tired, and makes far less mistakes on average.

This doesn’t necessarily mean lawyers are at risk of going away any time soon. Even larger law firms will most likely want the most advanced technology to make their firm the most efficient it can be, because why wouldn’t they? Tools like LawGeex’s AI and our e-Billing product, Bilr, are the next technological revolution, it will become the standard in law offices. Pilots, for example, didn’t go away as autopilot was introduced, but their job certainly changed and this technology became the safety standard of the 21st century.

In the legal industry today, according to McKinsey, 22% of a lawyer’s job and 35% of a paralegal’s job, can be automated.

However, this technology certainly couldn’t pass the Bar, so we still need our lawyers just as we still need our pilots; there are nuances that technology cannot quite grasp, at least not yet. When we consider that we’re coming into a whole new generation of lawyers, there’s ample reason to believe up and coming partners will be consistently more comfortable leveraging technology in their workplace because they grew up with it.

When we look at the LegalTech marketplace, we believe there are some areas of law that can be addressed in large part by technology, such as billing, a pretty manually intensive job today. There are a number of other areas, too, that could do with an injection of technology:

High-touch relationships aren’t going anywhere soon, but lawyers are most likely not upset at the prospect of less time spent doing billing.

I would be excited at the prospect of lawyers using Bilr, an aXpire product, to compare how quickly they can bill their clients when it’s as simple as talking into your phone/laptop and that’s routed to your billing clerk, or lawyers can quickly submit these bills themselves. For lawyers, Bilr allows users to do complete “timekeeping,” on the go. This means that with Bilr’s speech-to-text features, a lawyer can track billable hours on the way to the office, on the way home, and so on. No longer does a lawyer need to sit still for hours on end filling in numbers — several of which they might get wrong — at the end of the month. Traditional timekeeping does not only cost time, it also costs money.

An additional interesting area that we’re looking at, in line with the LawGeex inspiration, is utilizing our massive database of anonymized legal invoices to earn lawyers and non-legal vendors 6–11% more money on each invoice via machine learning and “invoice cleansing.” This database was drawn from a 15+ year history of working on the other side, helping corporations save money on legal invoices.

We demonstrably saved our clients $500M with our invoice cleaning tool, and now we’re offering it to law firms… that’s all an opportunity for legal practices to take more money off the table.

Even if you simply process a lot of invoices, our Bilr tool would utilize AI, just as LawGeex did in that Vice special report, to save you a lot of money and make your people more efficient. We call these clients “processors,” we provide a different, yet equally valuable, benefit. As stated above, we started out mainly serving the client-side of legal billing, meaning we have vast experience in this space. Branching out by helping individual lawyers and law firms now, however, does not mean that we’re neglecting the non-legal vendors, such as accountants or consultants; we’ve simply changed the value-add. What we provide to large processors today — who typically have countless vendors beneath them, sending invoices left, right, and center — is an end-to-end system for approving/denying each of the received invoices. Today, these large processors retain sizable legal and administrative staff to review each and every single invoice sent to them for approval by these “underling” vendors.

In the last few years, the growth dynamics of investments in legal tech companies were not optimistic. Investors were eyeing this immature business area, and held back for the most part. In 2016, $224 million was invested in the industry; in 2017, $233 million was invested. Relatively flat, although there was the common theme in growth stage investing that there were larger and larger deals being done. Last year was different, though, there was a rapid uptick in number of deals being done within LegalTech and the total amount of investments became greater than ever before.

The least popular areas in legal tech in 2018 are e-Billing and intellectual property, where machine learning is widely used, as we do with Bilr. That dynamic quickly changed in 2019, with a blowout financing round for Clio, a Canadian legal practice management company, which raised $250 million of funds for their series D. As you can imagine, our ears perked up at that.

Here was an unloved area, practice management, and suddenly, it seemed, it was an investor’s dream. It was (almost) the best kept secret in LegalTech. Practice management, and for us, e-Billing in particular, is a great business. We get to add a ton of value for our clients, and we also make a lot of sense as a SaaS investing, sticky revenues and long term clients. Furthermore, it powers law firms big and small, as a lot of these LegalTech software plays do. We believe the future of e-Billing will reshape the role of billing lawyers in a law firm’s hierarchy, big and small firms.

In a profession known for a steady institutional approach, change may feel uncomfortable. However, as with the general theory of evolution, law firms able to harness the benefits of LegalTech will have a chance to seize an early competitive advantage. It’s fair to say law firms have so far been slower to adopt potentially transformational technology than other sectors, particularly financial services. There are some reasonable explanations for that, concluded the Law Society in a recent paper on LegalTech. Legacy systems are a potential barrier, it warns, but so too are the profession’s traditional charging model and concerns around compliance and security. This industry structure was front of mind with Bilr, where lawyers can bill by speaking into their phone and the practice actually earns them and their firm money — plus, we made sure to be Enterprise Legal Management (ELM) software agnostic, so interoperability was front of mind. That’d be a piece of advice we’d give to any emerging LegalTech company: stay interoperable in as many ways as you can.

Without or without your law firm’s participation in the trend, change is coming for the legal industry. Cost pressure, from other law firms and clients, is forcing law firms to consider radical new options beyond the set-up of operations in lower cost locations. Even in traditional firms, younger lawyers, often more open to new technologies than previous generations, are now reaching partnership level. If you’re interested in this topic, as a lawyer, non-legal vendor, processor or maybe even a potential investor, please reach out if you’d like to learn more about our particular LegalTech e-Billing product, Bilr, or even just for a general consultation on the space: info@getbilr.com.

Gary Markham is CEO and Co-Founder of aXpire. Gary is a results and goal-oriented professional, with 25+ years technology, management consulting, and outsourcing experience. aXpire is the latest Blockchain/AI/Machine Learning Technology venture Gary has invested in, and with the launch of a new range of digital technology platforms, aXpire is poised to grow rapidly.

Bilr is aXpire's LegalTech e-Billing product, officially launching at the LegalTech conference in NYC, February 2020. If you’d like for information about this product, please reach out to us via our website or email info@getbilr.com with a subject line: Bilr Inquiry.

A personalized demo with our legal bill review team is the best way to figure out whether LSG is the right LBR outsourcing partner for your organization. Contact us to set up a demonstration where we show you how we can help you achieve cost savings with LSG’s legal bill review service.